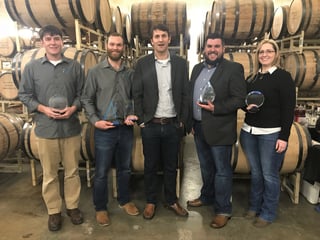 At the Kick Off Party, we also give out awards to recognize team members who have had outstanding accomplishments.  If you see any of this year’s award winners – please tell them congratulations! These are the 2017 winners: 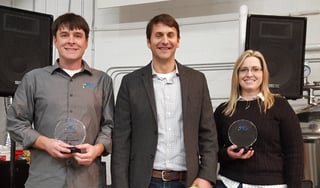 This award goes to the team member who performed exceptionally well while also delivering on the promise of who PTG is as an organization.  This year, I broke with tradition and gave out a co-MVP award.  Chris Vanzant and Kelley Medlock are two members of the leadership team at PTG. Both worked exceptionally hard this year.  They both put in long hours, solved complex problems and helped us navigate through a complex restructure of our team.

Rookie of the Year Award 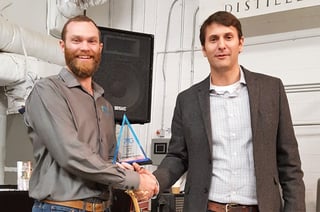 The Rookie of the Year Award goes to a team member who has been with PTG for a year or less and has really embraced the PTG Fundamentals.  Cameron Lewis won this year’s award.  Prior to joining PTG, Cameron was actually a First Responder, but he experienced an injury which put him on desk duty.  During this time, he began to train himself on IT and decided to make the shift to IT full time, once he gathered enough experience.  In a short period, Cameron has established himself as a leader on our team.

Engineer of the Year Award 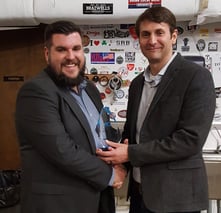 This award goes to the team member that has the best utilization numbers and the highest customer satisfaction numbers.  Just as last year, we had a very tight race – with just .06% separating the two candidates at the top. For the second year in a row, Andrew Atkins won our Engineer of the Year- the first time anyone has ever won it back to back! (PS: Andrew is about to be a new Dad, so he has two reasons to celebrate!)

Intern of the Year Award

Just as last year, we had such a great intern on our team that we felt compelled to recognize his work!  Caleb Colosky was one of our interns this past summer.  Caleb did such an outstanding job that we asked him to stay on-board, part time, while he was wrapping up college.  Caleb has been a quick learner and someone everyone knows they can count on. We are looking to welcoming Caleb to the team as a full time employee after he graduates in the Spring.

Just Do It Award

The Just Do It award is my favorite award. This award is voted quarterly by all PTG employees – and anyone is eligible for nomination.  At the end of the year, the finalists go into a run-off and the team members vote on the person who ‘Just Got It Done’ all year long.

It was an extremely close vote this year – with only a single vote separating the first place from the second-place winner. In the end, Cameron Lewis walked away with this award in addition to the Rookie of the Year Award.  Again, Cameron’s great attitude, willingness to take on any task, and ability to solve problems helped seal this award for him.

That’s a wrap for 2017!  If you see any of these award winners, please congratulate them!  We are looking forward to serving our customers in 2018 and seeing who will be next year’s award winners.

What makes a company one of the Best Places to Work?
PTG Earns Two New Microsoft Cloud Competencies
Congratulations to the 2016 PTG Award Winners!