Upgrading to Windows 10: 4 Features We Love

Upgrading to Windows 10: 4 Features We Love

On July 29th, Microsoft released Windows 10 to the general public and I can honestly tell you that it is well worth the wait. Windows 10 is Microsoft’s newest Operating System designed to encompass all the best features from Windows 7 and Windows 8. I’ve been running beta versions of Windows 10 for almost a year now and wanted to give you a quick rundown of the features that I enjoy the most:

One of the first things I noticed after turning on my Windows 10 PC is that it retained its Windows 8 predecessor’s ability to quickly turn on.  It booted up in a matter of seconds. Other than that, Windows 10 looks and feels like the Windows 7 interface, but with a facelift. 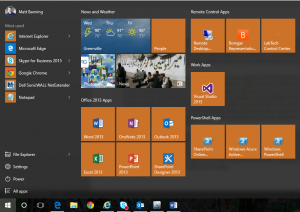 One of the most noticeable improvements in terms of functionality and aesthetics is the Start button – it's back! Instead of the traditional popup windows that expand to the right as you delve into folders (like on a Windows 7 PC), Microsoft streamlined the start button using a vertical format. This allows Microsoft to use the same Operating System, providing the same user experience, across all platforms: Phones, PC and tablets.

Another favorite feature of mine is Cortana, the digital personal assistant. This is Microsoft’s version of Siri. Cortana is available on select Windows devices and tablets, but comes preinstalled on Windows 10 PCs. Cortana is a personal assistant that can help you remember tasks, remind you when to leave for appointments, and reschedule your meetings. Cortana also uses Bing to provide relevant information like current weather reports, local news, and traffic information.

Personally, I use Cortana the most to take notes and to remind me about upcoming appointments. Recently, when traveling, Cortana let me know several hours before my flight that it was still on schedule and recommended when to leave for the airport based on traffic. 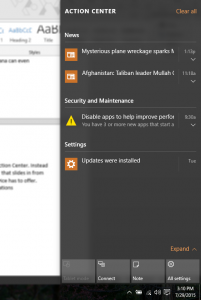 From the simple improvements in the start menu all the way to the new Edge browser – Microsoft really spent a lot of time and effort on this operating system. All in all, Windows 10 is the best OS I’ve seen in a long time.  Its feature-rich, super-fast, and extremely user friendly. You can expect this to be the new standard in both business and home use. Great job, Microsoft.

Have you used Windows 10 yet? If so, what are your favorite features? If not, what are you looking forward to trying? Tell us in the comments or on Facebook or Twitter.

You Just Lost Your Laptop, Now What?!
How To Stop Wasting Time Looking For Files.
What Will Windows 7 End of Life Mean for Businesses?
Why Patches and Network Upgrades are Important