If you're looking to purchase Microsoft Office for your business, you've got plenty of options. But understanding difference between the options - most notably between Office 2016 and Office 365 - can be confusing.

The short version: Office 2016 is a version of the Office productivity suite (Word, Excel, PowerPoint, etc), typically accessed via the desktop. Office 365 is a cloud-based subscription to a suite of programs including Office 2016. This means you have a few options for purchasing Office 2016: a stand-alone product or as part of an Office 365 subscription.

(Update 10/1/2018: Office 2019 is now available for purchase. The below post is still true, but there are more differences between Office 2019 and Office 365 ProPlus (the version of Office included in Office 265) than in previous releases of Office. You can compare features here.)
Here's what you get what you get with each option (please note: this focuses specifically on Office 365 business and enterprise plans):

There are two stand-alone versions available for businesses:

Includes everything in Home & Business 2016 plus Publisher and Access for $399.99 for 1 PC (not compatible with Mac)

The stand-alone versions include the ability to save your files to the cloud, which makes collaboration easier – especially among teams not working in the same physical location.

If you purchase Office 2016 as part of an Office 365 plan, you have a lot more options for plans and a lot more features.

ALL Office 365 plans include:

As you go up in Office 365 plans, features you can get in addition to the above include:

Which is right for me? Factors to consider:

There are few things to consider when deciding which version of Office 2016 or Office 365 is right for you:

Take a good look at what programs and features are important to you. If you just need the basic Office programs like Word, PowerPoint and Excel, either a stand-alone version or a lower level Office 365 plan is probably enough for you. If you’re looking for something more robust, or with access to programs like SharePoint, you’ll need Office 365.

If you need to access your information from multiple devices, Office 365 is the way to go. While files in Office 2016 can be saved to the cloud, Office 365 gives you a lot more options for access plus the ability to install Office on multiple machines. It also gives you the ability to access online versions of Office programs from ANY device with an internet connection.

Is it possible you’ll need to upgrade your plan?

What can you afford to pay per user? Would you rather pay a large sum up front or a small monthly fee?

Ready to make the move to Office 365? Interested to learn other ways we can support your growing business?

4 Tips for Cutting Down on Email Clutter
Office 2016 is Here… So What?
How to Prevent and Opt Out of Reply All Messages
What are Office 365 Groups and Why Should I Care? 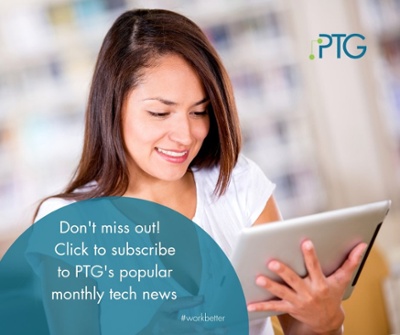