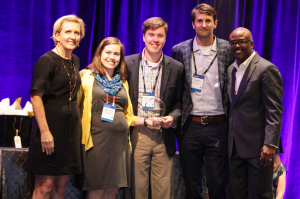 PTG, an outsourced IT company and Microsoft Partner, today announced it has been named Southeast Area Cloud Partner of the Year by Microsoft’s US Small and Mid-sized Business (SMB) Champions Club. The award recognizes the US SMB Champions Club partner who has demonstrated a commitment to Microsoft SMB Cloud business (Office 365, Azure, EMS and CRMOL) through consistent marketing of cloud services resulting in SMB customer adoptions of the Cloud solution set in Southeast Area.  Members of the US SMB Champions Club have shown dedication to arming the small business community with the right technology and services they need to be successful.

PTG is an outsourced IT company and Microsoft Partner, specializing in Microsoft Cloud services, including Office 365, Dynamics CRM Online and Azure. This is the third time they’ve been recognized by Microsoft as the Southeast Cloud Partner of the Year. They were previously recognized in 2013 and 2015.

“We’re thrilled to once again be recognized by Microsoft for our work in the Cloud,” said Reed Wilson, PTG founder and CEO. “It’s a testament to how hard our team works to solve customers’ technology challenges. We’ve helped hundreds of companies improve their productivity and security by moving to Office 365 and other Microsoft Cloud services.”

PTG, along with winners in six other categories were recognized during the Microsoft SMB Champions Award Reception in Toronto, Canada on July 11, 2016.

“Over the past year, our partners have helped to accelerate and deliver Microsoft’s mobile first, cloud first approach to small businesses across the U.S.,” said Cindy Bates, vice president of Microsoft US SMB and Distribution. “We value the continued commitment PTG has demonstrated to delivering products and solutions that increase productivity and help small businesses do more with less time. We congratulate them on this well-deserved award.”

PTG is an outsourced IT company and Microsoft Partner headquartered in Greenville, SC. PTG serves as IT support for small to midsize businesses across the Southeast. Specializing in Microsoft Cloud services, including Office 365, PTG has achieved Gold Competency from Microsoft in Cloud Productivity and Small & Midmarket Cloud Solutions.

Employee Exit Checklist for Microsoft 365 – in 4 Screenshots
TechLink, A New Greenville Business & Technology Conference is Designed to Serve Today's Modern SMB
5 Things a Managed Service Provider Should Be Doing For Your Business
Microsoft 365 Compliance, What You Need to Know