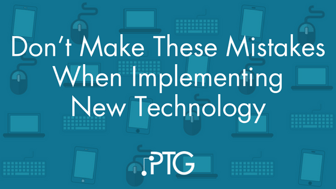 Wrackspurt Industries is instituting a new software for their employees to use to replace some existing systems. The leadership team at Wrackspurt is excited, since the new software promises to increase productivity and reduce friction between departments.

They’ve heard good things from other companies who use the software and the employees involved in the decision-making process said it would work well. Ernie, who championed the software, has done a trial and thought it has the potential to save the company a lot of money.

Fast forward some. The new software is in place—but not much has changed. Some people use the software a lot. Some people don’t use it at all. Some employees complain that the new software doesn’t do what they need it to do. There were some issues during rollout that meant some data was lost, and some people are still dealing with that. Ernie’s reputation has taken a hit for championing something isn’t going well—even though it’s worked great for other companies.

So, what happened? And how do you prevent it from happening in your business when you make a software or technology change?

Mistake #1: They didn’t get input from key stakeholders beforehand.

When looking at a new tool, get a few people together who will actually be using it every day. If multiple departments or job functions will use the new tool, include at least one person from every area. Include this team in any trials and demos. If there is an extensive setup process, include them in that, too.

Make sure the people on this team understand why they’re on the team and what they’re looking for. Implementing new technology often means changing some existing processes, which can be a good thing if it's simplifying the process. But you have to know that it's actually going to simplify it first.

That's what this team is looking for--what will need to change with this new system? Is the change beneficial or will it cause issues? This team needs to be watching for gotchas and missing functionality that could mess up an existing process that can’t, or shouldn’t, change.

While the Leadership team at Wrackspurt understood why they were moving to the new software, they never really talked to the rest of the staff about why. They mentioned it would save the company some money in the long run, but that’s it.

Most people don’t like change, especially when there doesn’t seem to be a good reason for it. Explaining the why, and how it will help people on a personal level, can help get your team on board.

When implementing the new software, Ernie and the team at Wrackspurt didn’t make a formal plan for roll out. The software is supposed to easy to set up, and the leadership knew what they wanted, so they figured they wouldn’t need a formal plan. The lack of plan lead to confusion about when the tool would roll out, who owned what part of the process, and what the process looked like on the new tool.

A formal plan for migration and roll is critical to any significant technology project (this is something your IT company can help you with!). At a minimum, a plan should define key stages (with timing) of the process and assign ownership to the appropriate parties. Lack of a plan can cause confusion and often makes for a chaotic and challenging rollout, leading to lost productivity and data.

You’ll also need a plan for any processes that change or get created as a part of moving to the new tools (remember those key stakeholders you need to get involved?). Making it up as you go tends to lead to inconsistencies and lost data.

Mistake #4. They didn’t provide enough education for their employees.

Wrackspurt didn’t provide enough training to their employees. The new software is supposed to be really user-friendly and Ernie learned it pretty quickly while doing a trial. So, they gave an overview of it in an all-hands meeting but left it up to specific departments to figure it out themselves. This lead to inconsistent training and a lot of employees who just didn’t know how to use the software. Ernie ended up spending most of this time answering the same questions over and over again for coworkers.

No matter how user-friendly a software is, you still need to provide extensive training so people know how to use it. You need to train them on the software or tools itself, and your processes on the software (especially if those are significantly different). This training needs to be a part of your formal plan.

The reasons to move to a new system can be extensive—everything from better cost to improved productivity to better security. But companies won’t see those benefits without a clear plan, buy-in from key stakeholders, and the necessary training.