What You Should Know About Encryption

What You Should Know About Encryption

Every business operates with some level of encryption in their organization. Not many have documented standards for use. Here's what you need to know about encryption to discover the "chinks in your armor" and to optimize your end to end encryption.

Encryption is like cryptography. It uses mathematical algorithms to scramble messages. Only individuals who possess the sender's key are able to decode the message. 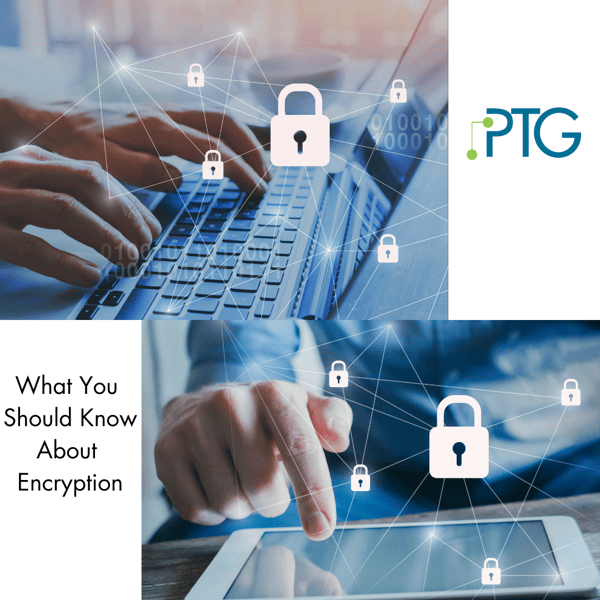 Microsoft BitLocker is a disk encryption tool included in Windows operating systems. It's designed to work with a Trusted Platform Module chip in your computer. That's where the encryption key is stored. It's possible to enable BitLocker without the chip, but a few settings must be configured and it requires admin privileges.

When BitLocker is enabled, Microsoft will prompt you to save a copy of your recovery key. You need the recovery key to unlock your disk. Without the key, neither you nor anyone else cannot access the data. You can either print the key or save it to your Microsoft account or a file.

BitLocker also lets you require a PIN at startup.

Microsoft 365 and Azure automatically encrypts your "data at rest" including synchronized and locally stored files from your cloud-based OneDrive.

Less Than 50% Have End-to-End Encryption

Encryption is a part of any organizations data protection policy. While most applications have encryption standards, many apps and services don't have to comply.

As a result, knowledge workers end up sending some messages protected by end-to-end encryption while other messages they send are not.

One example of this is Microsoft Teams and Zoom.

However, Zoom, being a stand-a-lone product, has yet to offer end-to-end encryption to all users.

An update in June on Zoom's blog says that end-to-end encryption services are currently being drafted and that the company has identified a path forward.

A Laptop is Stolen Every 53 Seconds

In the time it takes you to read this sentence, another laptop just got stolen. Even though media reports tend to focus on big data breaches orchestrated by anonymous hackers, physical device theft is still a legitimate concern for businesses.

According to many employee surveys, cars are the most popular place for device theft to occur.

Proper encryption of device drives will ensure that the damage done by a thief doesn't go beyond replacing the hardware.

Hopefully, business owners know that they need to password protect their WiFi network.

It became the standard back in 1999. However, as computing power has increased, WEP's flaws have become easier and easier to exploit.

Two of the major improvements with WPA were message integrity checks, that determine if an attacker has captured or altered packets passed between the access point and client, and the Temporal Key Integrity Protocol (TKIP). TKIP was the predecessor to the current Advanced Encryption Standard (AES).

WPA has been shown to to be vulnerable to intrusion. Most hackers do not attack WPA directly. They instead go after the Wi-Fi Protected Setup (WPS), a supplementary system which was designed to make it easy to link devices to modern access points.

In 2006, WPA was officially suspended in favor of WPA2.

To crack WPA2, a hacker must already have access to the secured Wi-Fi network to then gain access to certain keys. Once the keys have been acquired, attacks can be made on other devices on the network.

While WPA2 is not completely secure, breaking into it requires experience and considerable effort.

Although the safest WiFi encryption option for your business is WPA2 + AES, every WiFi network should be treated as a legitimate security concern.

Running a secure email service is another area that organizations should take seriously.

Microsoft 365 emails are encrypted by default and do not require any additional third party services to do it.

There are some additional settings you should be aware of that can secure your email even more. If you're a business owner using Outlook, contact us to find out how to keep your email data secure.

Password protecting a computer does not mean that it can't be accessed.

Our security systems engineer, Joe Beineke explains it this way:

"There's several ways hackers can access data on an unencrypted drive. However, it usually requires some form of physical access (there's a small set of exceptions, such as wake-on-LAN booting). If the hacker can extract your unencrypted drive and attach it to another computer (as easy as plugging a cable into the system board), then they have your data. Picture your drive being a very large thumb drive plugged into someone else's system, just not through the common USB method. Another way is to boot the device from a flash drive loaded with any one of several exploit tools, which bypass authentication credentials and provide access to the drive."

If someone picked up your phone and started going through your photos and messages, you would feel vulnerable and awkward.

But your phone might be sharing your private data in the background all the time without your knowledge.

Here's how to encrypt your iPhone.

How to encrypt your Android device.

Encryption doesn't necessarily protect your system from weak network security controls. In other words, disk encryption is only a part of the protective suite, but a vital one.

Ironically, while encryption plays a key role in protecting your business from bad guys, it is also the main weapon used by hackers to infect your with ransomware.

Need help creating an encryption standard for your small business?