The US Military has always played a significant role in advancing computer technology.

The first programmable computer is born

It was 1946 when the first large-scale, electronic, digital computer in the United States was used to refine hydrogen bomb designs and produce ballistics tables. 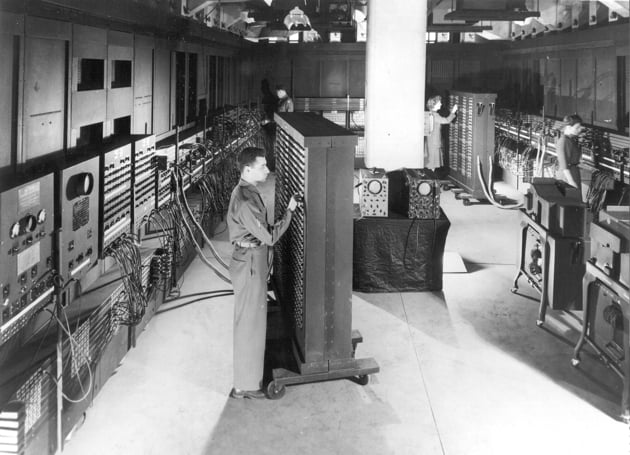 The ENIAC, or "Electronic Numerical Integrator And Computer," had taken three years to build. It was designed by physicist John Mauchly and a young engineer named J. Presper Eckert in Philadelphia. These two men used their brilliant minds to compile 17,500 vacuum tubes, 7,200 diodes, 6,000 switches and miles of wire into a device capable of soliving large scale numerical problems. The project was funded by the US Army.

An IT Engineer's job of maintaining the ENIAC often consisted of finding which vacuum tube had broken and replacing it with a new one.

A New York Times headline on February 15, 1946 announced that the ENIAC "flashes answers" and "may speed engineering." The concept of using electronic processesing to get a machine to "think" was born with the ENIAC.

This computer weighed 30 tons, consumed 160 kilowatts of electrical power and was larger than school bus. It could hold 20 10-digit numbers. It took the computer up to a week to run a single program, but the idea of using a computer to do what, up to then, only human minds were capable of--was thrilling.

Before the ENIAC, the military ballistics labs would literally recruit "human computers" bright young college-educated women tasked with solving complicated mathematical equations from a technology lab at the University of Pennsylvania.

The ENIAC's use led to the release of the world's first electronic super calculator in 1947 and its inventors, Mauchly and Eckert, went on to build the first programmable computer designed for business applications.

Does your business need support with its modern business applications? Connect with PTG.